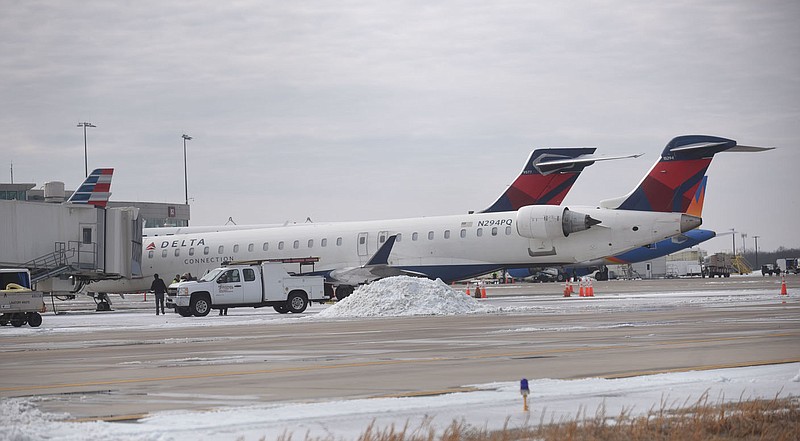 Do you use the airport? Let us know in our poll at: nwaonline.com/227xna/

Airport officials were told recently they have $30 million in cash available for projects. They’re still waiting to see how much federal infrastructure money and grant opportunities will actually be available. Estimates are the airport will recover to 2019 enplanement numbers by 2024, if not sooner.

The airport has 27 direct destinations now and expects others, including daily flights to Los Angeles, to return in the not too distant future. Four seasonal routes, including Orlando, Fla., are also expected to return for vacation season. San Francisco is dependent on international travel returning.

Two airlines, Spirit and Frontier, are seeking to merge, and Frontier is leaving Tulsa, Okla., next month, which could help XNA attract more Frontier customers from eastern Oklahoma, officials said. Frontier is focused on the western U.S. while Spirit focuses on the east.

“We are optimistic that it’s not going to be bad for us,” said Aaron Burkes, CEO. “It actually has the potential, if anything, to be good for us. But, again, it’s too early to really know, this merger will still have to go through regulatory approval.”

Frances Mayo, owner of Around the World Travel in Springdale, said her bookings for leisure travel were increasing in the fall before the omicron variant of covid-19 hit. There were cancellations, and bookings dropped significantly in December and into mid-January, she said.

“Since then, my numbers are back up and looking strong for spring and summer travel,” Mayo said.

Business travel, which was XNA’s bread and butter before the pandemic, appears to be coming back. But the long-term impact of online meeting technology use is still unknown.

“We do see business travel coming back, and the airlines themselves are predicting business travel is going to come back,” Burkes said. “It looks already like maybe 60-70%, according to some of the estimates. For us, locally, we think it’s going to be coming back with a vengeance starting in March.”

According to the 2022 Deloitte Travel Outlook, corporate travel demand nationally should improve significantly when workers return to offices in greater numbers, enabling more client visits. That development appears likely during the first half of 2022, according to Deloitte, which provides analytics to airlines and the transportation industry, among other services. Even assuming the best possible covid-19 outcomes, corporate travel in 2022 is unlikely to reach or even approach 2019 levels, according to Deloitte.

Even then, not everyone will be eager to return to their prepandemic frequency. Not all clients will immediately welcome the same volume of visitors they did in 2019, according to Deloitte. At the same time, business executives likely will continue to closely scrutinize travel spending and return on investment after operating successfully with so few trips during the pandemic.

Mike Lum, of Volaire Aviation, a consulting firm that tracks the airline industry and advises XNA officials, said the airport should be well-positioned over the next several months for its passenger traffic to rebound. The additional destinations added by Allegiant, Breeze and Frontier have already helped leisure traffic rebound relatively quickly at the airport.

Lum is recommending anyone planning to travel between now and May should book early.

“Demand is going to be robust, and flights are going to sell out,” he said. “Keep in mind most airlines have eliminated change fees, so there is no penalty if travel plans change.”

Business travel historically made up 12%-30% of all airline travel nationally. For XNA it was 60%. The airport makes more money off business travelers because they’re more likely to park, rent cars and spend on concessions.

Southwest Airlines said it’s back to 70% of prepandemic business travel levels, and United Airlines reported a 60% return. Southwest predicted a return to 80%-90% of 2019 levels by the end of 2022.

“Just prior to the conference, so two or three weeks ago, they started seeing a large uptick in bookings over the next few months, and they attributed that to increased business travel,” Branch said.

Companies nationwide are returning to the office and allowing travel, officials said.

Walmart is expected to start bringing employees back to the home office Monday, which could stimulate travel both into and out of Northwest Arkansas, officials said. Walmart has also booked several charters in the coming weeks and months.

“If this trend kind of continues of them freeing up and allowing more travel, you’ve got all these vendors and people who work with Walmart and others that haven’t really gotten to come meet in a couple of years. We think it could kind of open the flood gates,” Branch said. “That’s the hope.”

Potential headwinds for airlines include higher costs for labor and fuel, which could drive up ticket prices, Burkes said.

The airport has also seen an increase in leisure travel during the pandemic, attributed largely to landing several low-cost carriers. Low-cost carriers are adding market share as well, capturing around 20% of passengers at XNA. Allegiant has the most at 12%.

“I don’t think it’s coming at the expense of the legacy carriers,” Burkes said. “It’s truly capturing a different market, one that we have not been getting before.”

Legacy carriers still dominate. American Airlines maintains 49% of the traveling public at XNA. United has a 17% share and Delta 15%.

The last three months of 2021 saw XNA passenger numbers recover enough to be down less than 15%, compared to 2019. The four-week moving average at the Transportation Services Administration checkpoint is also starting to trend upward.

XNA and other airports use 2019 as a benchmark because passenger numbers went off a cliff in early 2020 as the pandemic began. XNA had a record year for passengers in 2019 with 922,533 people flying that year.

The 2021 budget was based on an estimated 350,000 passengers, but actual numbers were double that estimate, at 621,942. Operating revenues were 40% higher than expected. Several new airlines were added, and car rental companies retained their rental space.

XNA got a new business on the airfield earlier this month. King Aerospace announced they are locating a facility in two hangars at the airport to do maintenance, customization, upgrades and refurbishment of aircraft. The hangars had been vacant for almost 20 years.

Airport officials hope landing King Aero serves as a catalyst for aeronautical manufacturing growth and that it stimulates other revenue-generating ground lease opportunities and brings new, high-paying jobs to the region.

What is known about federal infrastructure is there will be about $25 billion for airports and $15 billion of that will be distributed based on enplanements.

“We know that our number is $4.4 million per year, roughly, so that’s about $22 million over five years,” Burkes said. There is about $5 billion available in discretionary money over the next five years the airport can seek for projects like the combined skybridge and arrivals lobby expansion, a $45 million project. The feds could pay for up to 95%.

“We think we’ve probably got a pretty competitive project,” Burkes said. “It’s shovel ready, which is one of the factors that they consider. We’re obviously going to get an application in for the skybridge project and fingers crossed, we can get some funding.” 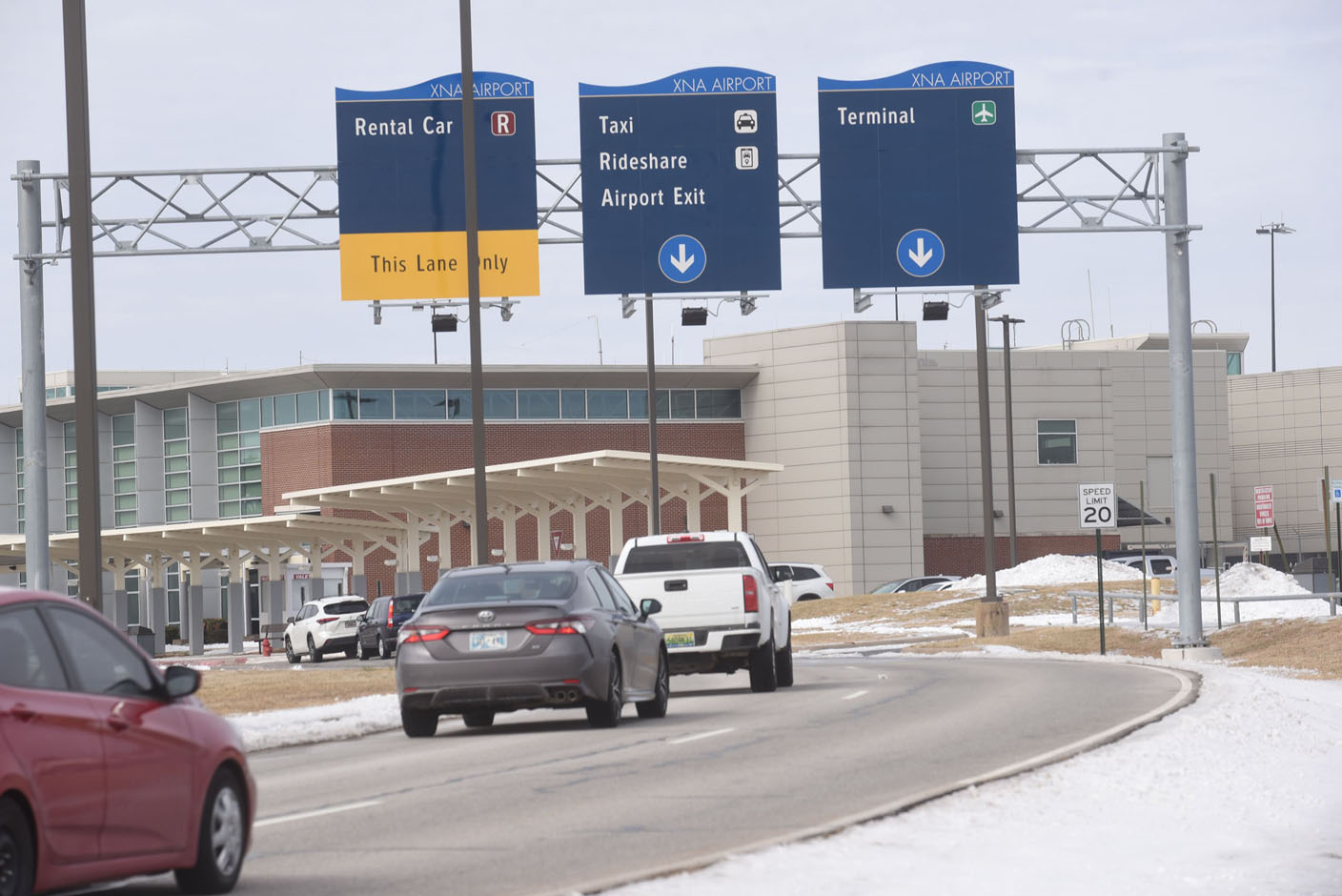